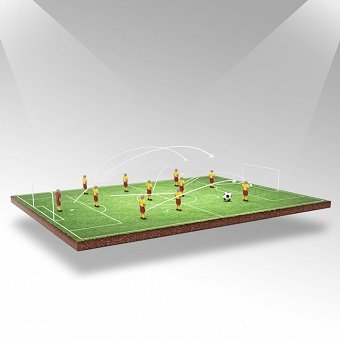 Many things can be done by football fans to support his favorite football team, such as by attending a team match directly. However, sometimes fans need something more than just watching football either directly or through a screen. They want something that they can give contribution directly to their favorite teams like arranging players who should get into the squad, thus maximum results can be obtained.

In the current practice of digital era, simulated games like fantasy football league are becoming a trend. National football supporter/ fans can prove his managerial talent in football fantasy league. Therefore, we, Suitmedia - work together with Labbola to create a fantasy league game where players available are professional soccer players who are competing in League 1 Indonesia.

To give the best impression of being a real football team manager, every user can choose every player who participates in League 1 Indonesia freely, transfer players, and automatically registered in the Global League containing all participants Fantasy League Labbola. At the user page, users can view the Dream Team (Tim Impian) content which contains the highest rated players during a running game week. In addition, Bulletin Board follows update points for non-live matches, information of players who are still absent, as well as other information.

The feature explained above, completed with simple yet informative design that we applied on ligafantasi.labbola.com has successfully increased its average session duration at +100%, monthly visitors at +1.427.800%, pages/session at +534%, and decreased it bounce rate at -76,37% in 30 days after the new site launched. In general, the user engagement after new site launching increased significantly compared to the previous period.